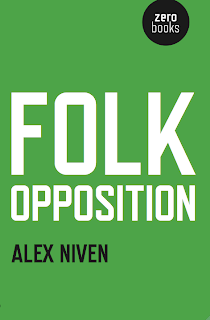 Before I'd read Alex Niven's excellent upcoming Zero Book "Folk Opposition" I'd made a certain assumption about its theme/contents on the basis of the title. Then, when I got to grips with it I realised that the title was a subversive pun.

My initial assumption about the use of the word folk was that it was Churchlandian, that "folk" as it often does in much of the discourse in and around Zero books and blogs referred to a common-sense worldview constructed out of primitive concepts that have been overturned by research in cognitive science and theoretical shifts in philosophy that seek to further decenter the humanist/enlightenment presumption of agency, will and self-hood.

I expected, then, on the basis of the title that "folk opposition" ( like folk psychology, and a fairly recently-floated attempt at the term "folk politics") would be a deconstructive broadside against atavistic traditions of organisations, protest and identity. This assumption was made, despite my familiarity with Alex's writing, on the basis that it's  hard to imagine the term folk, in the positive sense of a historically/locally grounded collective identity, being argued for from a radical perspective, yet this is what "Folk Opposition" insists upon, a notion of the folk which degenerates  neither  into a  Volk nor is disdained as being merely "folk" in the eliminitivist sense.

I won't get substantially into the content of the book itself (you should  just read it), but its manifesto-in-microcosm appears toward the end. "Deconstructive cynicism has had its day". I think in this Alex expresses an increasingly broad-based disenchantment with theoretical approaches that felt appropriate or energising during the Blair/Brown years but  which not only seem to lack urgency under the Coalition, but actually feel counter-productive.

Intellectual Rock Stars and Philosophical Princes of Darkness out to wrest the mantle of More Theoretically-Anti-Humanist-Than-Thou are themselves rather a stale tradition, and the virtue of Alex's book is that rather than worrying after some transformative subjectivity which will bring about the post-Capitalist transition, it's significantly more interesting, and genuinely more Socialist, in it's basic humility. Where are interesting things happening? Where and what are the resurgent vestiges of communalism and mutualism and how are these to be supported and encouraged, to what extent should actually existent and emergent practices lead the way rather than a top-down theoretical models that ultimately produce little more than a flurry of intellectually gratifying debate. The book's call, effectively, is for intellectualism to be a handmaiden to grassroots' movements.

As a manifesto from the student demonstrations had it last year: "you are not going to be famous". The best you can hope for is that you might be of some use, that your role is not that of leader, but servant.

Or, as Pound might have had it, "Pull down thy vanity!"