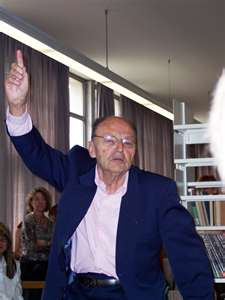 I picked up a copy of Bolanos 2666 yesterday and powered through the first section. I like it. it’s good to have something, fiction, that I want to read, and to feel my reading skills, my critical reading skills, kicking in. As a consequence of our recent discussions about Foster Wallace etc I also started watching interviews with writers I admired, Barth, Gaddis etc along with some I’m not particularly into.

Now I have to admit the whole process has been basically painful. I was obsessed with some of these writers in my twenties and early thirties and I also wrote pretty obsessively. I was always working on something, from the age of twenty-two onward, short stories and then increasingly novels. I haven’t written anything at all, or really read anything for the past two and a bit years since I finished The Begging Letter, which I kind of rushed to get done anyway. Now, I can forgive myself this given that in the last three or so years I’ve separated from my now ex-wife, gone through the divorce, moved house seven times, been back and forth to Japan three times , re-married, worked full time and also wrote Classless.

The problem is that I’m now happy, happy in a way I imagined was constitutionally impossible for me, and all my writing and reading was fuelled by unhappiness. A couple of year s ago I had a breakthrough and in some ways I simply allowed myself to have what I wanted. Previously the motor for much of my investment in writing was the fantasy that one day I would publish something and that finally I would be able to have my desire. Then, instead of endlessly pushing fulfilment into the future in order to give the present some direction, my mind some traction, I decided to have it in the here and now. In this sense I’m finally living, fully and unproductively in the world, as opposed to my productive half-life of writing.

Going back to look at and think about fiction again has brought back ugly memories and sentiments, the first of which is a kind of desolation at other people’s success, that cold, depressive down-rush at the sense of all the time you’ve squandered fruitlessly while other people were using their talents more wisely. What do I have to show for that twenty years?

Now I’m really not very competitive, not envious, or so I like to think and certainly in terms of say, other Zero writers, I feel nothing but pleasure at the ways they are prospering: yes, yes, this is exactly the kind of public intellectual culture I want to have in the U.K., but all this generosity of spirit is facilitated by the fact that they don’t write fiction and I have no aspirations to being a critic. Somehow in fiction other people’s success, other peoples ability does seem to steal from me, to reduce me, to make me feel less consequential, makes me want to attack and defeat them as a way to restore my self-esteem. I remember walking through Hyde Park in Leeds 6 one summer as the relationship I was in was reaching it’s grinding nadir: there was a younger couple in front of me, walking down the path, holding hands. They might as well have had them clamped around my heart: they didn’t, couldn’t know of course what awful pain it caused me to see their simple, standard display of happiness and connection. A more generous soul than mine might have found some affirmation in it: love exists! But it simply oppressed me.

The larger question is, to what extent do I want to get back into all that, to what degree do I have any aspirations to be anything? I don’t want that to sound maudlin, and nor do I want to sound self-regardingly enlightened by saying that it’s not, but in some ways for me fiction and writing are like an old, bitterly adversarial relationship that I’m well out of. Yet, I am feeling a desire to read again, to talk about fiction again (I confess I’ve really enjoyed thinking about Wallace, for years I talked about nothing but fiction, but again these weren’t happy years) even in this blog I scarcely mention it and one of the things I’ve enjoyed about the blogosphere is that it has forced me to engage with a whole range of subjects and positions (and people) I wouldn’t otherwise have got involved with. The past two years is the longest period in twenty years that I haven’t been working on something, the only period in the last decade where that something hasn’t been novel-length. Yet in another way I have completely forgotten about this whole period, in fact I view it largely as time of error, a long, purgatorial questing after myself, and one which I’m happy to just dismiss.

So several other, more minor questions also present themselves to me: should I go back to fiction in a serious way both as a writer, reader and more exhaustingly of all as a thinker and a talker about it given how consumed by it I’ve been in the past? Can I get over the worst aspects of my associations with writing and reading,? Should I start writing seriously again given that it hasn’t been a joyful process for me and will stir up all kinds of emotions I’d hoped to leave behind? Can I forge some new kind of relationship over time with writing itself? None of this maters outside the confines of my own life, but I feel in some ways like a recovered alcoholic (which, actually, I also am, more or less). Everything I wrote was always finally about the desire to stop writing and just live: the smart answer here is that they’re not mutually exclusive, but for me they were, the consolations of writing stood in the way of me fully taking hold of my own life, indeed I often half-consciously forced myself into interpersonal unhappiness as a way of strengthening the hold fiction had on me: if I made it my salvation I would finally get good at it.

But again perhaps a new phase is a starting, a new way of assessing, addressing and overcoming old selves, affects and attachments, re-writing the self by writing again. Now I know that no-less-a-luminary than Zadie Smith said that writing shouldn’t be a form of therapy but for me it can't be otherwise. Maybe it’s time to go back, rethink, re-learn, start at the beginning again. You hear the siren song that seems to be drawing you away from your life, from your own best interests, that wants to catch up a part of you and narrow the arena of your concerns, to pull you back into yourself and keep you there for years, time ticking by, nothing concrete in terms of money, or security, or comfort to be gained, depending on the ever-depleting patience, the good graces of those closest to you.

So no, of course not, it’s foolish.

Write that masterpiece! You know you can.

I haven't read 2066 but enjoyed the Savage Detectives, though with reservations about the needlessly lengthy format. I felt the same thing about the 1400+ pages of Infinite Jest actually: you're asking a lot of the reader, which okay does guarantee a level of commitment and engagement you wouldn't otherwise get (and I also really like your argument about the materiality of the book/novel), but then it does unavoidably seem like a sort of "I can because I'm a critically lauded writer" gesture. Underworld also being a classic example of this: you have this astonishing opening sequence which packs everything into it, then the rest of the novel (all 700 pages of it) is just a bit grey and middling (mimesis for the millenial drift of the characters perhaps, but isn't this also a bit of a poor excuse?).

Savage Detectives was similar I felt, in that the opening and concluding sections were gripping and resonant, but the main wadge of the novel in the middle was baggy and meandering, and could have been edited down to about half the size. It seems to raise interesting questions about the writer-reader relationship, seems to speak of a less critically empowered reading public without the guts to raise qualms about size-indulgence, just reading the first third of these massive tomes and then making a judgement based on reception/PR.

Sorry all this is a bit off point as you wanted to talk about 2066, which I know nowt about! Really arresting post.

ah.. i just wrote a really long response that blogger swallowed so in a day or two i'll write a post that summarizes what i wanted to say!

I hope you do go back to writing fiction and feel differently about it then. For what it's worth, as a blogger you're one of my favourite writers out there. It would seem (to me at least) a shame not to honour your talent and give it another serious go.

ha.. well actually that's worth quite a lot...

though now i feel a bit like a flouncy attention-whore...

All writers are shameless tarts, so why not shake that thang?

Actually that's ''better a failed geisha than a failed Leninist...''

Carl your real interests are humor and scatology, why don't you get inside the colon instead of trying to ''sober up'' all the time?

Well it's apparent how you find you're own colon intoxicating 'Deege'.

Honestly I still find the work he's done for me in 2006 the best work he's done so far - you can still read it in the archives, especially the ''hauntology bus tour''.

I can't find that work- could you please link to some, Post-Continental Satyr? Thanks for that.

You're right Alex, Savage Detectives is too long. You get the feeling Bolano was overcompensating a bit in the move from poet/short story writer to novelist. The five interlocking books structure of 2666 seems to help him cover the distance better.
On writing Carl, at pains of sounding like a romantic tit, how much choice have you got? If you feel like you're being asked a question, and it sounds to me like you are, you have to answer it..
Anyway, look forward to hearing what you have to say on 2666.