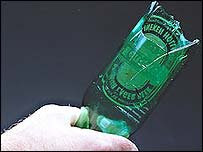 When I lived in Ramsgate about ten years ago I had two drinking cronies, Paul and Martin. I tended to drink with them separately as, while I got on with both of them, they didn’t get on especially well with each other.
Paul was old-school Left in his politics, extremely argumentative and deafeningly loud, Martin was apolitical, generous and funny. There’s no doubt that the intellectual and rhetorical force was on Paul’s side, he was bracing company for twenty minutes but then slowly the feeling began to creep over me: this is it. This is the only thing we’ll do, talk about, culture, politics, theory. More importantly we’ll only talk about it in one way, high-volume, non-stop velocity.
Paul laughed uproariously at his own jokes in the absence of anyone else’s laughter, seemed to be addressing someone behind or beyond the person immediately before him most of the time, peppered his talk with references no one else could understand, dismissed anyone he perceived as not being on his intellectual level and at the same time took a certain pride in his connections and interactions with the local underclass: buying weed and hanging out with the bad boys.
I was about the only person in the pub where we regularly drank who had any time for him at all, and even I found him deeply fatiguing, in many ways one-dimensional, stifling, irrespective of all the drugs he’d ingested in the Sixties, the sit-ins he’d participated in, the fact that he’d gone to University with Genesis P’Orridge or that one of his best friend was a widely-regarded poet. All very intellectual, but still, just not enough to get you through the night.
Women especially disliked him. A part of it was his assumption that knowledge itself was impressive and seductive: it wasn’t that he didn’t have fairly bog-standard lusts, he liked the same generically pretty girls anyone did but he was incapable of speaking to them without patronising them. His seduction technique was to try and undermine their ideas of themselves, they would grow dizzy under the spell of his furious mentation, he would crack them open and they would melt worshipfully into his arms. It never worked, and as it became apparent to him that it wasn’t working, that the girl in question was simply bored and repulsed by all this grandstanding he would become more aggressive: he would leave her wounded, if she wouldn’t gratify his ego by submitting to his superior intellect he would do his best to destroy hers. Then he would affect to have disdained her all along.
At this point I also lived with a large, extended and anarchically free-wheeling Family of Gothy, Bo-Ho painters and artists down from London, (we’ll call them the Clan). I was their favoured surrogate son at that point. They liked neither Martin, nor Paul. Paul because he exposed their intellectual hollowness, their lazy, Radio-Four-quoting lack of any real intellectual rigour, Martin because he had no especial interest in their sub-cultural capital and was always fidgeting to get away and do something more interesting. The idea that there might be a more richly multidimensional way of living than sitting round their enormous, Huysman’s style black dinner table listening to left-field music and yelling incomprehensibly at each other, or that “experiences” weren’t necessarily the things you had after ingesting large amounts of chemicals, offended them. They threw fairly extravagant parties full of artists and left-field types at which neither Paul nor Martin were particularly welcome and of which I grew increasingly bored.

My friendship with Martin was regarded as odd from both Paul and The Clan’s perspective: what I was after all was a combative, word-wielding Swans-and-Pansonic-loving drugs-and-booze-binging CerebroGoth.
What Martin had was shiny, non-partisan “people skills”, something the others deemed an irrelevance, if not an outright offence, not because they had ever had them, found them useless and abandoned them along the way but because they valorised what they had always been, socially-awkward, anxious outside a narrow domain of taste, nervous around “normal” people. Martin, however, seemed to find talking to people, almost anyone, rewarding, seemed to be able to engage with them on their own terms, patently enjoyed others. This was an enormous part of his charm, whereas the charmless Clan and the charmless Paul were thrown into a panic meeting people who might oblige them to come out of the corner they had assiduously painted themselves into and were proudly proclaiming themselves kings of. You must enter my empire, my citadel, I will not meet you on the border of yours! They regarded themselves as open-minded but their ego-world was too fiercely guarded for anything genuinely illuminating or disrupting to get in. The air was stale and heavy with desperate mutual affirmation, shot through with muffled hysteria.

The fact was that on a night out with Martin there was sense that things might happen, there was a foretaste of what I found later in Spain and in South America, that you could start the night with one group of people and end it with a completely different one, the process of moving about putting many other options and interactions in your path if you were open to them, a different model of conviviality and sociality to England’s*.
Paul seemed confident in many ways but it was a strident, inflexible confidence, underneath it there was the inability to listen to anyone else: his endless, urgent theorizing and riffing seemed neurotic, the fear that if he stopped for a moment someone might ask him how he was feeling, how his love life was going, what his hopes and fears were, ask him to tell them a joke or expose him in some way. A conversation would largely start like this : How are you? I’m reading Deleuze. Do you know Deleuze? No. Well, what Deleuze says is….
With Martin conversation was a more supple, broader medium, plus he was funny whereas Paul was dour, inquisitive where Paul was dogmatic, gentle where Paul was shrill, open where Paul was impermeable. Conversation, putting the world to rights, ideas, weren’t the entire purpose of the evening: the night was a series of possibilities, an arena of potential for finding out new things, a form of playful investigation. This was a large part of what Paul disliked in Martin, the ease with which he encountered others, his refusal to consider the question closed, his ludic qualities. Paul had read Kapital and he knew what reality was. Paul wanted converts and acolytes and got none, or at least not for long. Martin was widely loved.
One night things came to a head.
We were in disco above a hotel that was also a Language school I used to work in. Paul had been haranguing me inexhaustibly for the past few hours and when Martin turned up it was a relief. A game of pool, maybe, or table football, or a dance around. Maybe nipping out for a late night swim in the Sea, or a chat with some of the students who avoided Paul, who actually taught them, but who were friendly with Martin, who ran the local internet café. Any change of colour and tone, anything but this, was deeply welcome to me.
Paul was a big guy, almost as tall as me, Martin was all of five-foot seven. We were already drunk, Martin had come out late. Paul was loud and overbearing and could be intimidating in a way, nonetheless I would describe all three of us as physical cowards.
The conversation started approximately like this:
Martin (warily) “How are you Paul?”
Paul (bellowing) “ Alright. You still in love with the Twentieth century, are you?”
Harmless enough, really, funny in a way. Coward that I am I escaped to the bar to get Martin a drink. At some point while I was queuing up a bottle got smashed and waved around and by the time I got back Martin was visibly shaken, Paul gone.
You’re kidding me.
What the fuck was that all about?
What did you say to him?
Nothing. Really, nothing!

That was ten years ago, but still, certain things stick in your mind.
Martin’s coming up next week, as it happens.
I haven’t seen Paul in years.


*Outside ULU last week there was a Brit/Non-Brit split perfectly exemplified. Two girls were introduced to French guy by a mutual Spanish friend. Hello, they said , then immediately turned to each other and began talking furiously about an absent third party who would be joining them later as the French guy stood there looking surprised and awkward. Their eyes locked on each other they went breathlessly gabbling on, desperate to maintain the little, fearful bubble of private space until the French guy, realising he wasn’t going to get a word in stepped heavily back a few paces and began looking distractedly around, pretending he was intrigued by the ebb and flow of the crowd. The two English girls visibly relaxed, the tension went out of their postures: thank god, thank god, now we won’t have to find out anything about him until we’re good and drunk in a few hours time.

Oh my god - I realised that I fit your description of Paul (even the dreadful 'pulling' technique, with as much success). Even worse, is how you outlined the discomfort with warm, popular people. People find me quite scary - even though I'm just a noisy nerd (when drunk - when I'm sober I'm hardly there). It's the Martins in my life who grew up to get married and employable.

Great how you showed up pretentions of being 'special' in this 'type' as part of the general social ineptitude of the bingeing British.

Being so haunted by this little vignette may well be what separates good writing from bad. Thanks for that sinking feeling!

saw Paul in Waitrose today - he had a basket full of bargains - I envied his ability to find them, because there weren't any when I looked. I suspect that had the Clan matriarch been there another fight over reductions might have ensued. What does this ability to spot a red sticker, like a kestrel spies a shrew say about a person? Where is Martin in the pantheon of Ramsgate Waitrose bargain hunters?

i think martin was envious of paul. he admired the way paul used knowledge like a conversational snowplough and the way he'd turned himself into an icon, if only in that pub, but - poor old martin - he just wasn't prepared to put the hours in.

I've had a paul have a go at me recently (with the seduction technique). Your writing is good and made me feel all comforted, confused and unsettled.

Yeah well, if you're that into snowploughs, perhaps you ought to move to Canada and have conversations about snow levels.

Who wants to be an icon of bitterness and redundancy? Not me, thank you very much.

Martin sounds like he could at least muster up something approaching a life of some spontaneity and scope.

What possible use could the world have for somebody clinging like an infant monkey to the unresponsive wire-cage "mother" of an intellecktualism that was D.O.A some forty years ago?

Is there anything more annoying than some some dumb as dirt fucktwit that everyone loves? My whole life I was told to value being "smart," but no one ever told me it'd be so lonely. In recent years, I've taken to smiling more and saying dumb shit. Being popular is like making money. Easy, but sooooo boring! Also have a much better sex life now that I've developed a "going out" persona: a headstrong, male cliche, with a tinge of misogyny. Strange to think that that helps one get laid. What does this mean for the value of intelligence and originality in evolutionary terms, I wonder?