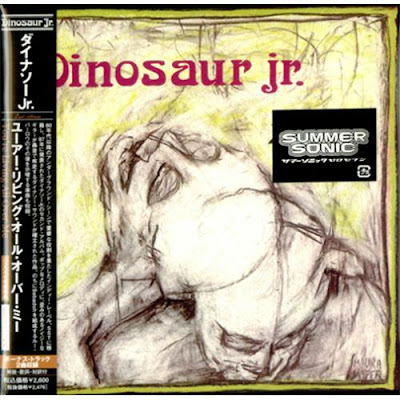 Actually, the moderate kerfuffle in the comments box re my dissing of MBV as pissweak forces me to qualify and also extend things a bit.
So, let’s imagine that you spend a certain amount of time enjoying other people’s enjoyment of something that you enjoy. For example, that someone, for argument’s sake let’s call them Ping, discovers the joys of all the American guitar stuff you grew up with, most significantly The Meat Puppets circa “Up on the sun” Big Black circa “Songs about…”, The Buttholes’ “Locust” and “Hairway” and most enthusingly of all Dinosaur’s “ You’re living all over me.” You haven’t listened to any of them in a long, long time but suddenly they mean so much to someone else, they’re so revelatory and they get off so much on listening to them, that it’s almost impossible for you not to share in the delight, you like these records anyway but suddenly now they’re making someone whose happiness you care about happy. This re-intensifies the pleasure. You express enthusiasm for the record; you both pay close attention to it. You say things like, “this bit's fucking great” or simply laugh out loud at a particularly spectacular “moment”. It takes on a kind of hyper-vivid quality, becoming suffused with al other kinds of emotional colourations, becomes something that in a small way you intensify and mould together. In the same way that forced laughter can become real and convulsive, so shared enthusiasms can start from the smallest nudge and then snowball.

So you get it into your head that this person, Ping, should hear Loveless and Isn’t Anything because as far as you remember they’re the daddies, the absolute guitar-reinvention zeniths of the period, peerless, everybody says so. You buy them as a gift to send to said Ping. You listen to them on your own. Your immediate feeling is, Ping’s not going to like this much. It’s not rocky enough. The record sounds lacklustre. You wonder what all the fuss was about. Whether Ping likes it or not I’ve yet to discover, but very possibly, on the basis that Ping does, my own appreciation of it may well be amplified.
Now that may make me, in fact, piss weak in some ways. Don’t you know what you think about anything/like, man? But it kind of raises the question of the degree to which enjoyment is ever not enjoyment of/through the other. The people I have had the most consistent musical dialogue with, my brother in law and sister, are a huge factor in my listening experience. The minute I hear something and think that either Jackie and/or Niall are going to like this, my pleasure in it is boosted. An excellent recent example would be the Shockheaded Peter’s “Are you happy or are you real” the moment I heard it I imagined my sister dancing about the living room to it. Instantly I liked it. There is a deep and gratifying reciprocal element to music appreciation of course, swapping tapes, breathlessly naming tracks and artists in reverence sessions down the pub etc, but I think it goes deeper than that. Even if the people for whom/on whose behalf you’re always listening aren’t concrete others, family members, friends, lovers etc, it's non-contentious enough surely to suggest that you are always listening for someone, in terms of critical voices, political ideas and ideals, a sense of the tradition etc, so a reasonable question might not be, what do you think of that, but, do you have anybody to listen to that for? And with Loveless, I didn't.
Best of all, of course, is when the ones you’re listening to it all for are also the ones you’re listening to it with.

Loveless has a kind of solipsism-inducing density. It pushes you back into yourself, swamps you with itself, cuts you off from that circuit of listen-with-other shared enjoyment. I think Xasthur's the same. I can imagine sharing Krallice or WITTR with someone, and I want to play Portal to all sorts of people, but Subliminal Genocide really is something you go through on your own. OTOH, I can readily imagine people I love bouncing around the room to "You made me realize".

Captcha: eplamet, a splendid made-up word for which a definition must be found.

To echo Dominic a bit: if the pre-Isn't Anything EPs don't thrash & sear as hard as any band back to and including the Birthday Party, then I dunno what does. I mean, "Feed Me With Your Kiss" - jeezus.

I also think this has less to do with enjoyment of/through the other than just what tones & sonic constructions tickle your audial libido. UFOMammut, Big Black, even Dino Jr. all sport a rhythmic stiffness and stainless-steel sheen to the production that MBV absolutely does not. The bands you list in the second paragraph are all mechanistic grind & rusty squall, whereas MBV is a much more fluid, miasmic, distant spectre (which is exactly what Shields was trying to create, in deliberate contrast to the "bright, in-your-face" tones of many '80s rock records, both mainstream & underground).

So, if that's what revs your motor, of fuckin' course Loveless would sound piss-weak and fluffy by comparison.

I take it, then, you never saw MBV live. Made Ministry sound like clock-radio alarm, I tell ya.

"Dino Jr.... sport a ... stainless-steel sheen to the production that MBV absolutely does not."

Are you for real? Have you heard You're Living...?

Obviously, You're Living ain't a Def Leppard record, but it's got that dry, close-mic'd crispness of early '70s hard rock, plus it's possible to distinguish between one guitar track and another - neither of which can readily be said of MBV.

Yeah i'll give you that seb, although i think stainless steel is a bad choice of analogy for that record. It may be close-mic'd but it's still messy as hell in the best possible way (not forgetting the closing lou barlow tape-recorded Poledo)

I'm very partial to that record and i find the production so much more satisfyingly smeared than that of, say, Bug, which is definitely of the polished variety as grunge became a money-maker for Geffen et al.

Oh and You're Living came out on SST which really was some label eh no? I'm thinking tyhe Minutemen's Double Nickels in particular which will forever be in my top 10.

Certainly, Bug is slicker than the Exxon Valdez' wake compared to You're Living; I perhaps should've allowed for more rust in the metaphor, but I think we're looking in the same direction now.

And damn right about SST - arguably the best American indie label of the '80s. What a shame Ginn managed to squander the goodwill of the whole underground.

that was meant to tickle your audial libido