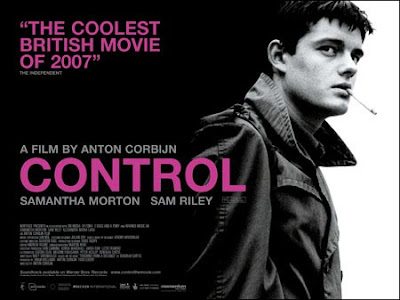 It was the pram in the hall wot dun it.

As a matter of fact, at just this very moment as I sit here trying to think of something simultaneously witty and illuminating to say about this typically excellent post, there's a 7-year-old boy standing at my shoulder repeatedly saying "what can I do now? What can I do? I'm bored, what can I do?". Now he's taken to throwing bits of paper at me. I really should get off the computer and pay him some attention...

He's told me to tell you that I am an idiot. I shall have to distract him by doing pig impressions, as per usual.

tell him i say HE is an idiot, that i'm the size of a mountain and that if he doesn't stop it now i'll come round and sit on him till he cries and swears to never again enemy your promise.

Well, now that I've finally seen it, and though I'll never cease to be amazed that a man could prefer Cop Shoot Cop to Joy Division...well, you're right, aren't you old chap. The moments of clunkiness you mention ('Love is actually tearing us apart' moment esp) are indeed utterly clunky, and I think you're right about the near-saving graces such as the 'already-dead' last few days (Sam Riley is very good in the same way that Sheryl Lee was in Fire Walk with Me - someone who clearly isn't a great actor nevertheless having a total commitment to a ridiculously difficult part - but the wide-eyed innocence is a tad overplayed).

Other things that irritated me, then:
- it struck me as a failed myth, and there's little more pathetic - it could have just gone the whole hog and made a totally over-stylised film - approached it like Hannett might have done, as total myth and artifice. It made gestures at that but didn't have the tastelessness or the cojones to do it in the way that, say, Todd Haynes would have done, as something entirely fantastical. So it fell between the stools of a totally unconvincing slice of social realism and a not-quite-hagiography (because you do get flashes of the essential selfishness and misogyny of the whole affair...)
- also, the audience looked like Hoxton hipsters, which got in the way rather. Everyone was too good looking throughout, really. It was never hard enough. I mean look at this and then at Corbijn, and the difference is immense. Stylisation isn't the problem, but a failed stylisation.
It did irritate me a little less than 24 Hour... though. Incidentally, I presume you've read the Fangirl takeon the rather dubious sexual politics?

yeah... but i suppose it was lumbered with fidelity-to-the-book concerns, hence the "realism".. thing is, i have no particular interest in listening to JD but I am extremely interested IN them, if you know what i mean...partly that trying to work out why so many people like them.. then again i was never really into the whole Ballard continuum stuff so it's not in my dna, somehow.. but i do think they risk overkill/normalization at this stage.....just another Mojo cover-friendly great Rock band..i hadn't read the Fangirl take as it happens...but it's VERY good, isn't it....

Well it is in my DNA, sure...The funny thing is it's not a Ballard-continuum at all: I read Ballard precisely because of the references in the things that grabbed me in that 14-18 person(a)-forming period (mainly Joy Division, but also England's Dreaming and The Holy Bible) as did many other people I know...In fact, pretty much all of my obsessions derive ultimately from those particular things. More perhaps that they were in the Ballard-continuum, dragging others into it unknowingly and ruining them henceforth...

What I would prefer would be a film that was of Joy Division rather than about them - as in the way that Velvet Goldmine doesn't need a single Bowie song to make clear that it understands glam perfectly. A trickier idea to sell, I imagine.

point taken...i partly had a similar experience of music taking me on to other related things.. though i was always more into film and got into it very young...so i wanted the soundtrack to "suspiria" quite a few years before i wanted to read the Naked Lunch 'cos it was so name checked by bands etc


you're right in the of/about thing too...but velvet goldmine got made, so...

Of course, shudder to think wrote the best songs on that Velvet Goldmine soundtrack.....

indeed they did! 'The Whole Shebang' in particular is a charmer. Better than Placebo, anyway...